This application is an end-to-end IPsec VPN, customized for Amahi.

It's a simple to install, simple to use, secure, VPN. It's compatible with Apple's iOS devices like the iPod, iPhone and iPad, Android devices (ICS or later) and many Windows IPSec VPN clients.
Internet Protocol Security (IPsec) is a protocol suite for securing Internet Protocol (IP) communications by authenticating and encrypting each IP packet of a communication session. IPsec also includes protocols for establishing mutual authentication between agents at the beginning of the session and negotiation of cryptographic keys to be used during the session.

IPsec is an end-to-end security scheme operating in the Internet Layer of the Internet Protocol Suite. Some other Internet security systems in widespread use, such as Secure Sockets Layer (SSL), Transport Layer Security (TLS) and Secure Shell (SSH), operate in the upper layers of the TCP/IP model. Hence, IPsec protects any application traffic across an IP network.

Visit the IPSec VPN wiki page for client installation and for more details. 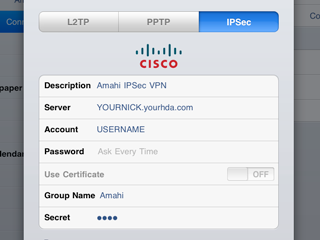 This app is in status ALPHA and is only available for testing to members of the Amahi Tester Program until the app is stable to become Live.