Minecraft Server is a local Minecraft server that you run in your HDA. You need the Minecraft game to be able to play in your server.

Minecraft is a game about placing blocks to build anything you can imagine. At night monsters come out, make sure to build a shelter before that happens.
Minecraft is focused on creativity and building, allowing players to build constructions out of textured cubes in a 3D world. Gameplay in its commercial release has two principal modes: Survival, which requires players to acquire resources themselves and maintain their health and hunger; and Creative, where the player has an unlimited supply of resources, the ability to fly, and no concept of health or hunger. A third gameplay mode, named Hardcore, is essentially the same as Survival, but the difficulty is locked on the hardest setting and respawning is disabled, forcing the player to delete his or her world upon death. An outdated Classic version is also available for free, although it is no longer being developed. Creative Minecraft resembles Classic, but with many more features. This app also downloads the McMyAdmin web-based admin panel, which in turn allows you to install other things like the Bukkit server and manage it's extensions. Generally, the server and the admin use a lot of CPU, even when not in use. This means they also consume a lot power. In Amahi we have further customized this app with a simple addition control panel to stop the server and the admin, preventing them from using CPU and power. 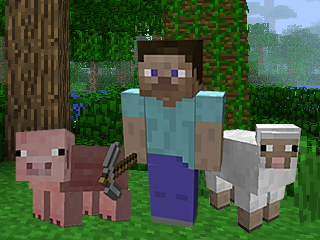