Transmission is a fast, easy, and free multi-platform BitTorrent client.

Transmission is designed from the ground up to balance power with simplicity. We've set initial preferences so things "Just Work", while advanced features like watch directories, bad peer blocking, and the web interface can be configured with just a few clicks.

When Ubuntu chose Transmission as its default BitTorrent client, one of the most-cited reasons was its easy learning curve.


With few dependencies and written in C, Transmission has the lowest memory footprint of any BitTorrent client we've seen. It's also the client of choice on low-memory hardware. Imageshack chose Transmission for its BitTorrent farms because the competition "requires amounts of memory several times greater than Transmission". Native.

Unlike some cross-platform programs, Transmission seamlessly integrates with your operating system. The Mac OS X interface is written in Objective-C and uses Growl notifications and dock badging to keep you informed.

"It's fast, it's extremely lightweight, and even though it's available for a variety of platforms ”it behaves just as you'd expect a Mac program to." Macworld, naming Transmission a "Mac Gem"

The GTK+ interface has been carefully written with the GNOME Human Interface Guidelines in mind. It uses libnotify for torrent notification, DBUS for hibernation management, and GIO for watch directories. Powerful.

Transmission is free software. All its code is freely available online and is licensed under either the GNU Public License v2 or the MIT License. The development team welcomes anyone who is interested in contributing code, documentation, translations, or other help. 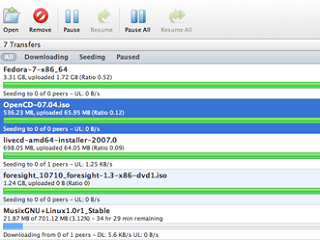